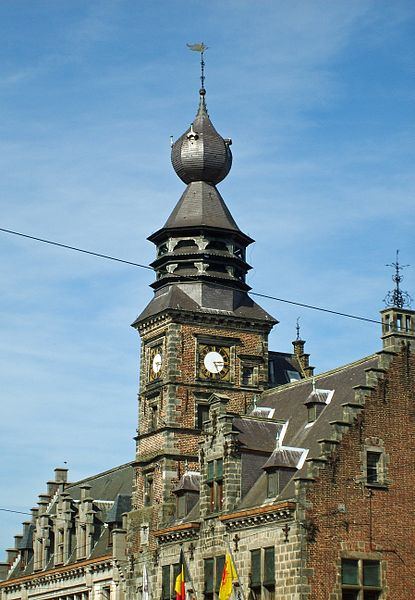 The definition of the term “belfry” was somewhat vague at the outset. referring originally to the mobile wooden towers used in siege warfare, the term was later applied by Viollet-le-Duc in the Dictionnaire raisonné de l’architecture française to the wooden watchtowers mounted on the palisades surrounding the portus or preurban centres. It was to be applied occasionally to towers of all sorts, but particularly to those housing bells or standing next to the bell-tower.

Belfry are mostly found in town centers, and connected to the local town hall or church. At their time, the Belfries represented the growing importance of cities instead of the feudal system in the Middle Ages.

After several fires, stone began to be used as building material instead of wood. Mainly square, robust towers were built in this period. Later, from the 14th to the 17th century when most of the still remaining belfries were built, the towers lose their defensive character. They become narrower, and the styles are influenced by Baroque. In the 19th and 20th centuries, newly created belfries had a more symbolic value of independence and prosperity.

Alone and warming his five wits, the white owl in the belfry sits
– Alfred, Lord Tennyson

Belfries are outstanding representatives of civic and public architecture in Europe. Through the variety of their ‘functional’ forms and the changes they have undergone they have been a vital aspect of civic architecture in Europe since the 13th century. They are unique constructions reflecting the development of civil authority that marked the history of Flanders (in its historical sense) from the Middle Ages onwards.
Referring originally to mobile wooden towers used in siege warfare, the term was later applied to the wooden watchtowers mounted on the palisades surrounding the portus or pre-urban centres. It was to be applied in particular to those housing bells or standing next to the bell tower.

The early belfries of the 13th and early 14th centuries are strongly reminiscent of the seignieurial keep, from which they take their massive square form, elevations showing sparing use of openings, and rising storeys built on or designed for vaulting. The main shaft is topped by a wall walk and parapet running between bartizans: the central spire features a slate campanile roof and variations on a number of forms. The finials of the corner and central turrets are decorated with animals or symbolic characters protecting the commune. The 13th-century belfry of Ieper (Ypres) is a fine example of this type, although it forms part of the market hall complex later to include the town hall, construction of which continued down to the 17th century.

Belfry helps in understanding an important interchange of human values-over a span of time or within a cultural area of the world-on developments in architecture or technology; monumental arts; town-planning or landscape design.

It is an outstanding example of a type of building; architectural or technological ensemble or landscape which illustrates (a) significant stage(s) in human history.

The Belfry is from 1366. The Town Hall is built around it and houses the Tourist Office. Can only be visited by groups after arrangement.

This 17th century Belfry has a carillon with 36 bells. Open by appointment with the Tourist Office.

The 97 m high Belfry has two carillons, each with 49 bells. The tower can be visited from Easter – the end of September in the weekends and on public holidays at 2.15 PM. From June 1 – mid September also on Mondays at 7 PM. In July and August daily at 2.15 PM.

Town Hall in two parts. The oldest part from the 14th century was the Cloth Hall. The rest was added in the 16th century. The Town Hall can only be visited with a guide.

Building from the 14th century with Gothic Belfry. Open for groups after arrangement at the Tourist Office. For individuals from April – October, every Sunday afternoon at 2.30 PM.

Gothic Belfry from the 15th century. Restored in the 19th century. Carillon with 52 bells.

The Hall dates from the Middle Ages. In 1520 the upper part was rebuilt. The Belfry has a carillon with 48 bells. Can only be visited by groups by appointment.

Although the first town hall and belfry had been recorded here in 1563, Hesdin had been without a belfry for a century by 1875 when Daniel Lereuil, the son of the mayor, donated money for the building.The bell was later named Danièle-Marie-Pauline-Henriette after the donor’s mother.The tower is 70m high, stone-built, and the lower part is incorporated into the town hall.At the top, the watchman’s platform is covered by a slate dome to provide some protection from the weather.The belfry is now a UNESCO World Heritage site, together with other belfries in northern France and Belgium. The ground floor of the belfry is open to visitors and the town hall houses the local museum.

The most important of Bruges’ towers stands 83 metres tall. It houses a treasure-chamber, an impressive clock mechanism and a carillon with 47 silvertoned bells.Your reward after a climb up the tower’s 366 stairs is a breathtaking and unforgettable panoramic view of Bruges and her surroundings.

Also called the Tower of St. Jacob. Originating from the 14th century and ‘only’ 20 meters high. Can only be visited by appointment.

The old part of the Town Hall dates from 1770. In 1924 the new part and a modern Belfry was added to the building. Can only be visited with guide after arrangement.