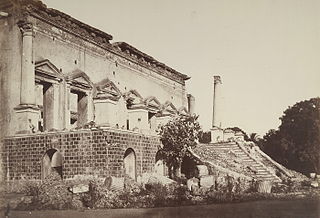 As a child, I loved listening to stories, and I still do. My grandfather, who was a raconteur, would weave a magical fabric of history, myth, and mundane reality, and I would listen to him in awe. One of the recurrent characters in his stories was Begum Samru. This name always fascinated me- some sort of an oriental enigma! My readings revealed that Begum Samru was not larger than life, and this helped to debunk the naïve imagery of an oriental enigma. But nonetheless, she remained a fabled character for me. The dormant desire to see her residence took me to the old city, in search of an old character. Tucked away, somewhere inside a serpentine lane, Begum Samru’s kothi barely manages to survive today. Once a symbol of power, it lies in a state of abjectness, humiliated by time and ignored by people. What remains is just a part of the erstwhile complex.

Once a symbol of power, it lies in a state of abjectness, humiliated by time and ignored by people. What remains is just a part of the erstwhile complex.

A set of Classical Greek columns creates a spectacle that transcends the clutter around. As my gaze concentrates on the lofty shafts, I am reminded of a painting depicting Begum Samru with her retainers, sitting in this kothi. The neoclassical settings visible in the painting compliment the Palladian architecture of the residence. Executed in the Company style, this painting is attributed to Muhammad Az’am and was possibly painted in the 1820s. The Begum’s centrality in the painting is an unmistakable metaphor of her power, as highlighted by art historian Alisa Eimen. Begum Samru’s power, according to her, was best expressed through architecture, through her regal residences in Delhi (a haveli near the Jama Masjid and this kothi) and Sardhana.

Contemporary memoirs and travelogues state that Begum Samru was born around the year1750, and her original name was Farzana. After her father’s death, Farzana and her mother came to Delhi and the little girl trained to become a nautch girl. Walter Reinhardt, a mercenary who was known as ‘Samru’ among the locals, fell in love with Farzana. She became Reinhardt’s mistress and after his death came the dramatic turning point in her life. Begum Samru inherited the jagir of Sardhana in 1778 and went on to become an influential political power in North India. Surprisingly, she had amicable relationships with both the flourishing Company and the decadent Mughal court. In a way, she had mastered climbing the tight rope. The Begum maintained her troops and crushed two attempts to overthrow the Mughal emperor through negotiation. Pleased by her political prudence and loyalty, emperor Shah Alam II conferred the sobriquet of ‘Farzand-i-Azziza’ (his most beloved daughter) on her. The proximity of her kothi to Qila-e-Maula  (the exalted fort) ,the Mughal fort-palace which we now know as the Red fort, testifies her importance in the 18th-century.

Akbar Shah II, the new Mughal emperor, gifted Begum Samru a plot of land in Shahjahanabad, in 1806.  The Begum built a flamboyant residence (kothi) on it, surrounded by late-Mughal style gardens and fountains. The  architecture was predominantly European in style, with its characteristic pediments, massive classical columns with Corinthian capitals, Venetian shutters, friezes of wreaths and olive branches, cascading staircases, and urns. Two company drawings from Thomas Metcalfe’s album called the Delhi Book shows the north and south views of the kothi.

It emerged as a visual symbol of the Begum’s four-fold power- military, economic, social, and political. The kothi was an isolated unit, yet much sought-after matriarchal construction in a patriarchal environment, in an imperial monarchical organisation that Stephen P. Blake refers to as the ‘patrimonial bureaucratic system.’

Today, the building is crumbling due to the lack of compassion, embodies its patron’s values- the ability to resist, to negotiate, and to win. Veiled by huge advertisements , this decaying structure is as resilient as its first occupant. It only seeks a new lease of life. A couple of enthusiastic visits. An iota of love.

A Visit to Osborne House in England