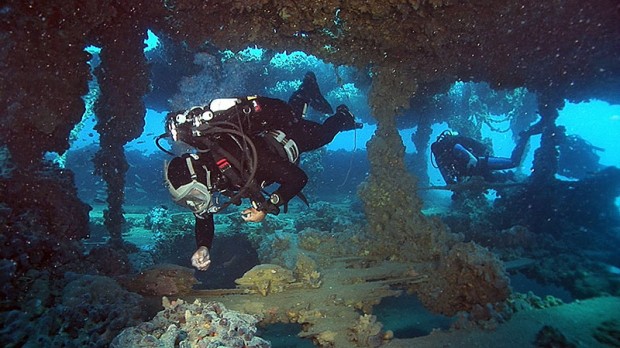 Since 2001, UNESCO protects the Underwater Cultural Heritage which encompasses all traces of human existence that lie or have lain underwater and have a cultural or historical character.

Why is it so important protecting the Underwater Cultural Heritage? We live in a wonderful world, full of heritage sites, but we usually forget that there is a mysterious underwater world. The aim of UNESCO Convention is to protect also what is submerged.

When I read the UNESCO definition, I immediately think about Titanic and the love story between Rose and Jack. I think that I’m not the only one. People knows the Titanic history in particular for James Cameron movie, but we usually do not know that there are a lot of “Titanic” all around the submerged world. There are over 3 million shipwrecks, some thousands of years old, lie on seabeds, and we have not yet discovered all the mysterious wrecks that are submerged.

In the Mediterranean Sea, for example, there are more than 2,500 shipwrecks from a different era. They are vessels, boats, warships, battleships, cruise ships, merchant ships, and other types. Each wreck has its own origin and history, but every ship has a common denominator: they are shipwrecks!

Fortunately, some wrecks are not forgotten, but they are destinations for scuba divers. In particular, the Baron Gautsch’s wreck is one of the most popular diving destinations in the Adriatic Sea.

Baron Gautsch was an Austro-Hungarian passenger ship, which took people from Kotor to Trieste. Unfortunately, it ran into a minefield that has been laid by the Austro-Hungarian Navy after the beginning of the World War I. On 13 August 1914, it sank and 127 innocent died.  It was a disaster.

The wreck of Baron Gautsch was found on August 15, 1958 by marine salvage company Brodospas, near Rovinj, in Croatia. Nowadays, it is considered a National monument and it is protected by Croatian Government for its historical meaning. It is the symbol of a disaster that could be avoided. At the same time, it can be considered a Monument of Life. Why? Because, during the years, the ship has been changed by time, and place. Underwater habitants have transformed the wreck into a house for them. They have colonialized every part of the ship, which is overgrown with algae and sponges. This is an example of how life lives also underwater.

Underwater life at Baron Gautsch wreck Underwater world is usually underestimated and unknown, but it is a source of knowledge and fascination. There are so many mysteries to be revealed, so…what are you waiting for? Put your scuba diving mask and dive in underwater cultural discovery!

Pirates of the Caribbean: Port Royal, the Underwater ‘Sin City’ of Jamaica

The Legacy of World War I Underneath the Waves