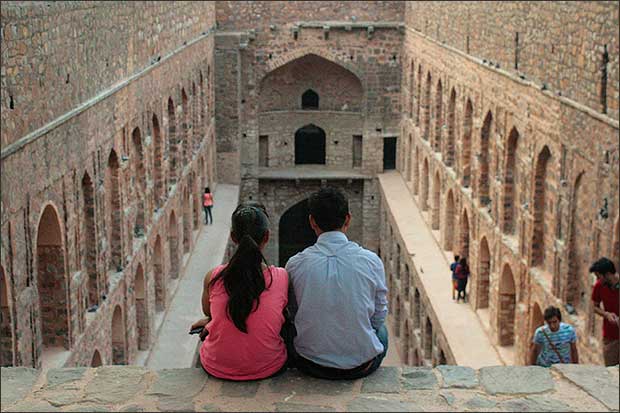 The history of Delhi can be experienced gazing at what remains of its glorious past are dotted on every nook and corner. Here a number of capital cities were established and build over a period of time.  The 1300 plus monuments from almost 16 cities of Delhi represent a wide range of religious, secular and some, very charming structures. Where some of these are an architectural marvel, others represent its glorious past.

Step wells or Baolis built over last one thousand year in Delhi are interesting structures, useful and exemplary of finest engineering and design. Baolis are unique to India and mostly prevail in states of Gujarat, Rajasthan, and Delhi.

Step wells or the Baolies, as their name suggests, are a water-related underground monument, most intricate and complex ones. Step wells are commonly composed of a circular well at the end, a pond in front with descending stairways leading down several stories from the ground level. In fact, a Baolis also played the role of community places where people, especially women, could get together. They offered as an escape route from the cruel heat of Delhi’s summer.

It is believed that once Delhi had 100 baolies but presently we can’t find more than 10, many other are defunct and unrecognisable. The baolies of Delhi once experienced the life of common folks around them in the bygone era. Some of the significant baolies in Delhi are:

The oldest structures of Delhi are reported from Mahrauli similarly , the oldest existing Baoli of Delhi, the Anangtal Baoli lies in Mehrauli.  Also known as Yoginipura, was built in the 10th century by the Rajput King Anang Pal II of Tomara dynasty. Anang Tal literally means reservoir provided by Anang Pal of the House of Tomar. There are three more Baolis in this area including Qutb sahib ki Baoli, Gandak Ki Baoli and the Rajon ki baoli.

The Gandak Ki Baoli an evocative structure whispers through your ear about its past glory. it is a five storied structure located in the Mehrauli archaeological park was built by Iltutamish for Khwaja Sayed Muhammad Qutb-ud-din Bakhtiar Kaki who was a well renowned Sufi Saint during his reign who had greatly inspired the Sultan through his Islamic teachings.  The Baoli is called Gandak ki Baoli as it is believed that its water contains Gandhak (‘Brimstone’ in English) or sulphur that is  known to keep the skin hydrated. This Baoli is a rectangular structure with the largest well ever seen in Delhi.  The step-well is divided into five levels with a flight of 105 steps lead down to the water level. Each level has pathways on the east and west side, which gives access to the circular portion of the well in the rear end. Coarse rubble stone of uniform size is used for the construction. The pillars at the fourth level bear striking resemblance to the pillars used in the construction of Quwwat-ul-Islam Mosque in the Qutub Minar Complex.

Ronald Vivian (RV) Smith describes the origins of Gandhak Ki Baoli In his book ‘The Delhi That No-one Know’, that one day Iltutmish visited the saint Qutub Sahib and noticed that he hadn’t bathed for days. Upon his enquiries, he found out that the saint had nowhere to bathe. Iltutmish immediately ordered for a step-well to be constructed, which was built in record time and is known as Gandhak Ki Baoli.

Baoli of Nizamuddin Located close to the dargah of Hazrat Nizamuddin and was built under the supervision of Hazrat Nizamuddin in 1321-22 AD. The water in the baoli is believed to have healing powers along with Gandhak ki Baoli. The Sufi Saint is also notorious for maintaining distance from the seat of power and his tussle with Sultan Ghiyas-ud-din Tughlaq. The baoli became the cause of dispute between both.

Ghiyasuddin Tughlaq while building Tughlaqabad had a decree that all available workers should be working on his city at the same time, the saint was building his baoli. When sultan found out that workers were building the baoli in the night, he forbade the sale of oil for the lamps that lit up the darkness. The legend goes that Nizamuddin commanded his disciple, Naseeruddin, to use the baoli water to light the lamps to let workers finish building the baoli. Nizamuddin conferred Naseeruddin with the title Roshan Chiragh Dilli. Eventually, chirag dilli, a village grew around the resting place of Roshan Chiragh Dilli. Nizamuddin cursed the Tughlaqabad project thus: “Ya rahe ujar, ya basey Gujjar.” (It will remain deserted or be inhabited by Gujjars.) And so it turned out, their relationship got further intense when Ghiyasuddin was away on a campaign in Bengal and from where he issued an edict asking Nizamuddin to leave Delhi before he returned. That inspired the famous line attributed to Nizamuddin: “Hunooz Dilli door ast.” (Delhi is still far.)

Rajon ki Baoli The baoli got its name from the masons that taken up permanent shelter in the deserted mosque and live there for a long period of time. During the 1920s, ASI got them evacuated from there. The soot marks on the ceiling of the mosque even today is proof of their long presence.

It was built in 1516 by Daulat Khan during the times of Sikander Lodi, and is three storeys deep with an additional layer at ground level. Its scale can only be experienced only when you get real close. Like all the baolis, there is a well in the back and pool in the front. The arched halls on all three sides are shaded, cool and bear calligraphic inscriptions from the Quran.

Agrasen Ki Baoli seems most popular baoli in Delhi because of its design, beauty and physical condition and also because of its accessibility. It is located among high-rise buildings in the Connaught Place area of New Delhi, hiding it completely. Agrasen Ki Baoli was made recently famous by Bollywood films like PK and Sultan.

It is believed that this Baoli was originally built by the legendary king Agrasen during the Mahabharat epic era.It was rebuilt by the wealthy merchants of Agrawal community in the 14th century. This huge and beautiful baoli has three levels with beautiful arches at the end and chambers on the longer side which were used as a resting place. These profusely carved chambers used to become cool and provide quiet retreats during summers.

Other noteworthy and worth visiting baolies in Delhi are:

The Tuglaqabad Fort built by Ghasuddin Tuglaq in 1321 AD is known for its scale and structures. To fight the scarcity of water in this quite dry terrain Ghiyasuddin Tuglaq had planned for various water structures including thirteen well dig Baolies to fulfil water needs. But the city was said to have been abandoned due to lack of water and because of the curse by Sufi saint Nizamuddin Chishti. Only two baolis can be identified in the fort premises, the one on the east and other on the western portion of the fort. Due to high growth of vegetation and wild plants, these baolis are quite inaccessible.

The emperor Feroz shah was among the great builders despite his difficult tenure as sultan of Delhi. He took a keen interest in building activities. As far as the baolies are concerned, two other baolies in Delhi,  other than the Hauz khas Pond were built by him. The one lies in the hospital campus of  Hindu Rao in North Delhi the other being the Baoli at his capital city of Feroz shah Kotla. Originally this baoli used to be encircled by a series of chambers but those have disappeared and what remains now are the ruins which can hardly be identified as baoli. The Baoli at Feroz shah kotla is a beautiful one unlike other baolies it is circular one and chambers are also above the ground level. This baoli is still being used to water the grounds of Feroz shah kotla the famous cricket field. After a case of suicide in 2014, this portion remains closed.

Another lesser known rectangular Baoli is lies and hidden within the government residential campus of R. K. Puram sec-5 and part of the larger Wazirpur group of tombs and mosque. The distinct Lodhi period feature (1451-1526 AD) of the baoli is the domed turrets at the end. (pixels-memories. blogspot.com)

Another unique baoli among others’ is the Red Fort Baoli with ‘L’ shape in plan with intact apartments on both sides of the flight of steps leading down to the bottom. While most other baolies are constructed with rubble masonry, it has been constructed with a uniform sized stone units. It is believed that the baoli is older than Red Fort, which was built in 1648 AD.

The number of existing baolies shows that our previous generations had visualized the importance of water conservation and built many water-related structures but unfortunately, we have failed to preserve the heritage which is now crumbling and looking at us in despair.

The Colonial Bungalows Of Bengaluru