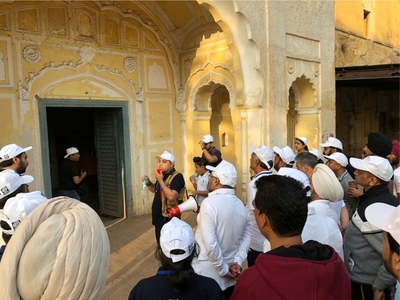 The Patiala Foundation organized the 2nd annual iHeritage walk at the Bahadurgarh Fort near Patiala, as part of the GoUNESCO #MakeHeritageFun campaign.

The event was part of a global initiative by GoUNESCO to motivate people to engage with their heritage. Under this initiative, more than 100 cities across 5 continents simultaneously participated in events that create awareness about heritage, and in the process, created online buzz as well as offline conversations.

Bahadurgarh Fort, situated 6 kilometers from Patiala, on the Patiala-Chandigarh Road, was constructed in 1837 by Maharaja Karam Singh of Patiala. The four-walled fort covers an area of about 2100 sq. meters and is encircled by 2 ramparts and a moat that is circular in shape. This place was named after the holy Guru Tegh Bahadur who was invited by Saif Khan, who stayed at this place. The fort consists of a historical Gurdwara Sahib (a Sikh temple) named Gurdwara Sahib Patshai Nauvin, which shows fine Sikh architecture. A mosque is also present in the fort. It was built by Saif Khan in the year 1668. The tomb of Saif Khan is situated 300 yards away from the fort.

The 2-hour long event began at 6:30 am with enthusiastic participation from around 200 residents of Patiala. The walk, facilitated by Mr. Ravee S Ahluwalia – Chief Functionary, Patiala Foundation, took the participants inside the fort premises, which at present is utilized as a Police Commando Training Centre and remains off-limits for the general public. Along the tour, participants experienced the rich heritage of the Fort through its fascinating history and architecture.

The walk was flagged off with a focused talk on the objectives of GoUNESCO and the iHeritage initiative, and how participants can contribute to spreading awareness about their rich heritage through social media activities throughout the walk. A plan of the path to be covered was shown to the participants before the walk began, with Mr. Ahluwalia leading them as the guide for the day.

Multiple pit-stops were arranged for the participants to enjoy refreshments offered by Verka, who sponsored the event. The walk, which lasted for about 90 minutes, was followed by a felicitation program for the dignitaries who participated, as well as the volunteers and organizers for their planning and work towards a successful event. The event concluded with breakfast for all, followed by a visit to the Gurudwara with the Fort premises. The overall event was deeply appreciated by the participants.

The Edakkal Caves in Kerala

The Cathedral of Notre Dame