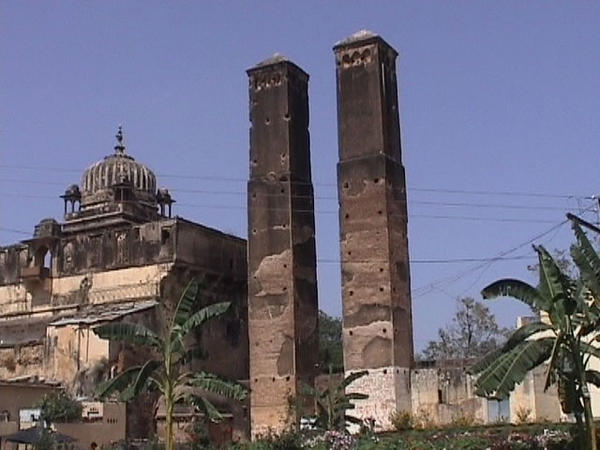 Jhansi is a gateway to the legendary Bundelkhand region known for its valor and courage. The town sharing its border with the state of Madhya Pradesh is famous for its link to Rani Lakshmi Bai of Jhansi, a key player in the 1857 first war of independence. It was a stronghold of the Chandela Kings but lost its glory after the downfall of their dynasty in 12th century. The ancient name of the city was Balwantnagar. As called the gateway to Bundelkhand, Jhansi is situated between the rivers Pahuj and Betwa.

According to the fable, the Orchha Naresh “Veer Singh Bundela” (King of Orchha) was sight-seeing from one of his watch-tower’s along with his friends and was asked if he could see the new fort that he had built on Bangara hill, to which he replied he could see ‘Jhainsi’(meaning a blurred image of a fort). In the course of time, the name ‘Jhainsi’ corrupted itself to ‘Jhansi’.

The most interesting, distinguishing and avid sight in Orchha are the Sawan Bhado pillars. These two pillars are built from an ingenious Persian-designed cooling system, being perforated on the top in order to catch the wind, while their lower parts were connected to a reservoir of water, which is an architectural marvel but isn’t noticed or praised as it should have got. Due to the foundation and geographical location of these pillars they seem to kiss each other during the monsoon as the soil between them gets dampened and soft. Thus, they got their unique name “Sawan Bhado” which translates to monsoon lovers.

“The Wizard Dhyan Chand” was a hockey player, who is one of the greatest field hockey players of all time, Dhyan Chand’s upbringing was done in Jhansi, due to several transfers of his father he had to terminate his education after only six years of schooling. The family finally settled in Jhansi, Uttar Pradesh, India.

In 1933, Chand’s home team, the Jhansi Heroes participated in and won the Beighton Cup, which is considered the most prestigious of Indian hockey tournaments. In 1936, India got selected for Berlin Olympic game in which India had to face Germany. Forty thousand  people witnessed this epic game. Dhyan Chand was admired and feared by his opponents, who felt that the ball got stuck to his stick when he played.

Legend has it that after seeing him play at the 1936 Berlin Olympics Games, Adolf Hitler offered Dhyan Chand, a major in the British Indian Army, German citizenship and a higher army post. The prolific striker politely turned it down.

Belonging to the city of bravery, courage and self-respect, I felt it was my duty to inform people about this legend of Jhansi “Dhyan Chand”, so I arranged an awareness seminar in my own very school, and told them the whole chronicle of this fable. It was a very interactive session, all docents and scholars participated in the seminar actively. At first we lit the candles to usher our honor, respect, and love to Major. Some of our notable historians like Dr. Sudhir Jain, Mr. Jayant Mallaiya , Dr. Prakash Diodiya enlightened the public about the life and achievements of Dhyan Chand. At last Mr. Ashwin sang a song in glory of Jhansi. I had also prepared a memorandum which I distributed at the end of the seminar.

As a tribute to legendary hockey player of India, a statue is built at the hilltop at Sipri, Jhansi. A statue of Dhyan Chand in action was also installed at the Jhansi heroes ground. Beneath it are the words, “National Pride, Hockey Wizard, Major Dhyan Chand.”

Today below the statue of Dhyan Chand, idle youth gamble, play cards and take drugs. This is the same spot where Dhyan Chand was cremated.

Go Heritage Run is being organized in Orchha in October – goheritagerun.com/orchha

Koshari: Food and the Italy-Egypt Connect