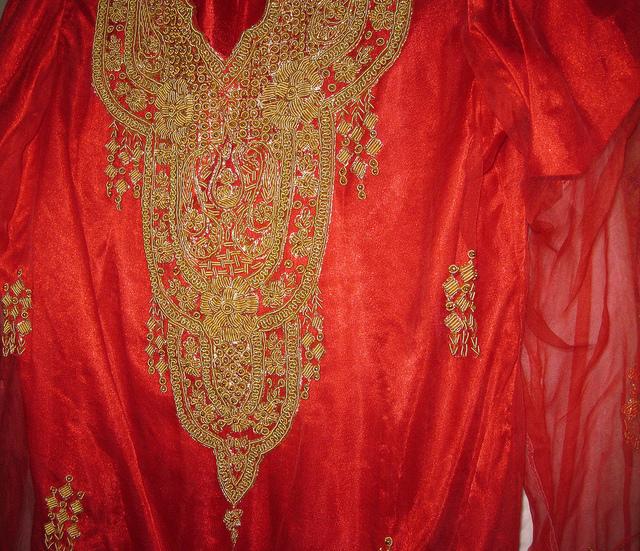 Zardozi is an elaborate hand embroidery practised in India along with other countries like Iran, Iraq and Pakistan. It uses metal thread, primarily silver and gold threads woven into decorative patterns using a specialized hand tool. The Persian word ‘zardozi’ means ‘sewing with a gold thread’ (‘zar’ meaning gold). It is an ancient art form used to adorn the royal garments and other items such as royal tents, pillow covers, bed sheets, table cloth, etc. It is said that the art form was brought to India by the Mughal rulers. The craft reached its zenith during the period of Akbar (a 16th century Mughal emperor). However, by the time of Aurangzeb’s period (the 6th Mughal emperor) it registered a decline due to lack of royal patronage. Zardozi could not flourish on its own since this ornate craft uses expensive raw materials like gold, silver and other expensive gems which made it affordable only for the rich and the wealthy. Therefore, the opulence of zardozi was emblematic of the regal gentry.

With industrialization and the introduction of modern machinery, the art of Zardozi suffered another blow. The British rulers of the country made India a supplier of raw materials and an importer of the finished product. The rich handloom industry of India had to pay a heavy price.
In India Agra, Jaipur, Lucknow, Delhi, Benares and Bareilly are centers where zardozi is based. The design is prepared using a four-step technique:
1. Designing- The design is first drawn on a tracing sheet. The sheet is then perforated along the lines of the pattern, using a needle. These patterns can either be floral, inspired from nature or just geometrical patterns.
2. Tracing- The tracing paper is then kept over the cloth on which embroidery is to be made. This base garment can be silk, velvet etc. A piece of cloth is then dipped into a solution of kerosene and robin blue,  rubbed over the tracing paper so that the ink seeps through the holes onto the fabric.
3. Setting the Frame- The fabric is then fitted and stretched over a wooden frame which is called ‘adda’.
4. Embroidery- Once the frame is set, craftsmen set to work using a needle with a hook on one end. The needle is attached to a wooden stick called “aari”.

After the craft was embraced by the fashion industry, it got a new lease of life. Its look of opulence and excess, which made it fit to be worn by the royalty, also made it the perfect choice for bridal wear. Two famous designers who are credited with the revival of zardozi and bringing it onto the ramp are Ritu Kumar and Abu Jani and Sandip Khosla.

In an article published in Verve magazine, Ritu Kumar describes the poor state of the traditional craft of zardozi when she started working for its revival. One only had old traditional hand-me-down garments passed down from one generation to another usually on the occasion of marriage, while the newer ones were inferior in quality and aesthetic.  “I did a project of zardozi revival at a time when it wasn’t available in the country and the art had almost died. And bridal wear was nothing but traditional attires. You would get bandhini sarees in Rajasthan, gota work in Punjab, and of course the Benarasi sarees in Varanasi. Apart from a smattering of clothing and textiles, there was not much available,” said Kumar.
All this and a lack of customization at the time led her into the field of designing. Since then, Zardozi embroidery has remained a favorite with the bridal designers of our fashion industry because of its intricacy and opulence.

Another label that loves the use of Zardozi is Abu Jani and Sandip Khosla. During the late 80s their woolen shawls embroidered with zardozi were a great hit at Harrod’s. Other Indian designers who use zardozi work are Manish Malhotra, Sabyasachi, etc.
Zardozi has also gone international with such prestigious brands as Chanel and Louis Vuitton.
The high fashion has certainly prevented this art from becoming history. But the demands of the modern age pose several other challenges for the craft. Certain machine made works are tried to pass off as zardozi.
While the original zardozi used to be made from gold and silver wires, the cost constraints have brought in the use of copper wires plated with gold and silver. The art has adapted, as it should, to the needs of the modern world. The style is freer and the embroidery lighter. The cost is also tried to minimize without compromising the essence or aesthetic of this technique. Zardozi has not only survived. It lives in splendour as do our grandmother’s ‘sarees’ with those shining golden threads.

Shipwreck and Massacre: The Bloody Battle of Batavia