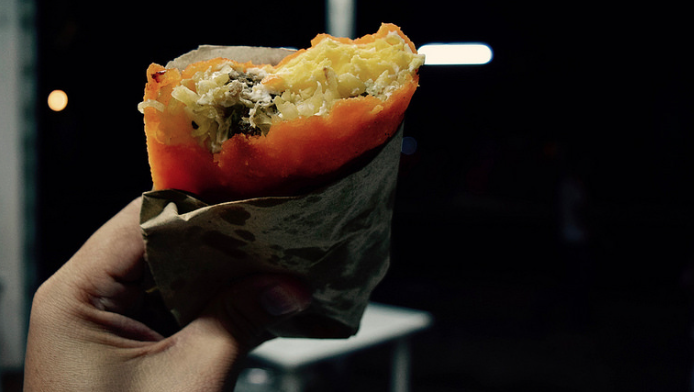 When visiting the Ilocos region, 500 kilometers north of Manila, the Philippines’ capital, you cannot help but notice these large hand-held orange pastries being sold along the streets of Ilocos Sur and Ilocos Norte. This “pastry” is called Ilocos empanada, one of the region’s most popular snacks and from which it has long been known.

You will also quickly notice that there is a slight difference between the empanadas sold in Ilocos Sur (south) and Ilocos Norte (north). The reason for this may be the availability of resources in both districts. Ilocos Norte has a sizeable source for the achuete (atsuete/ annatto), extracted from the seed of the achiote tree (scientific name: Bixa orellana). Ilocos Sur, however, does not have much access to this natural resource.

Reflecting the colonial past

The Ilocos empanada reflects history itself, since it is inspired by the Spanish empanada. Empanada is a typical snack that originated from Spain and its former Latin American colonies. An empanada is made with wheat flour and stuffed with meat, carrots, corn, cheese, and/or peppers. There’s a lot of variation with the stuffings, depending on the ingredients available in the area.

Taking the empanada as Ilocos’ own

As is often the case with any cultural exchange, the Spanish empanada has been modified to fit the local area’s culture and traditions. Since rice, longanisa (ground pork and molded into sausage links), papaya, mung beans, and eggs are abundant in Ilocos, these ingredients are used for the local empanada. And since baking is not a traditional way of cooking in Ilocos, the empanadas are deep-fried rather than baked.

Where to try the Ilocos empanada

The best places to try the Ilocos empanada are in Dap-ayan in Laoag, Ilocos Norte; Food Hall along Batac River, Ilocos Norte; and the Heritage District in Vigan, Ilocos Sur. Dap-ayan is open 24 hours, 7 days a week; while for Batac and Vigan, it’s open every day up to 10 PM, depending on the stall.