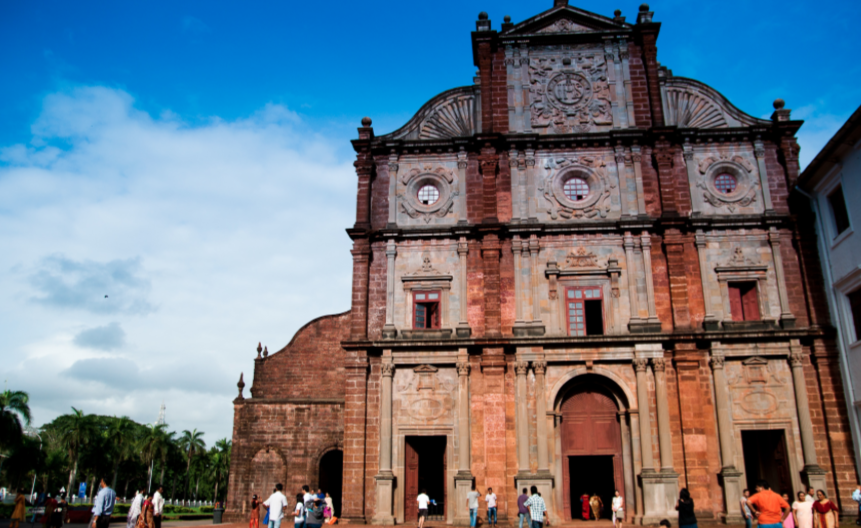 As a child when I had studied about the spread of Christianity and I had studied about St. Xaviers body being displayed in the church in Goa , I was curious to visit the church.
The Basilica of Bom Jesus is located in Goa and it is a UNESCO world heritage site.It holds the mortal remains of St.Francis Xavier. Now you must be wondering what is Bom Jesus,well it literally means good Jesus. The church has the best example of Baroque architecture in India being one of the oldest church in Goa,it attracts thousands of Tourists daily.

The main Altar of the church holds a large statue of St.Ignatius of Loyola protecting the tiny figure of the infant Jesus. He was the founder of the society of Jesus. A gilded emblem of the Jesuits is encircled in radiant rays. Over the emblem is the Holy Trinity of Father, son and Spirit. To the right is placed the body of the Saint Xavier himself. The body was moved into the church in 1622 and installed in the mausoleum. The body of the saint is kept in a glass-sided coffin.The mausoleum is put in the Silver casket with the body of the Saint,which was a gift from the Grand Duke of Tuscany.

The construction of the basilica of Bom Jesus began in 1594 and completed in 1605. The mausoleum, designed by a Florentine sculptor Giovanni Battista Fogginni. The church is also adorned with paintings of scenes from the life of the Saint After every ten years the Holy relics of the Saint are displayed during the Saints death anniversary on 3rd December. A 9 day novena precedes the Feast of St.Francis Xavier.

The last time the body of the Saint was displayed in 2014 and now the religious crowd have to wait till 2024. Though the church is 408 years old, it is well maintained and open to public on all days.This is the only church in Goa that is not plastered.

The Woman Married to Mount Nemrut

The Temples of Khajuraho