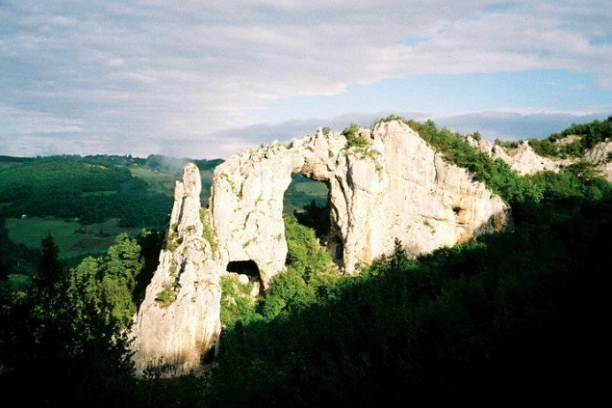 Iʼd like to enlighten you about Petar Kocicʼs homeland and three of the most beautiful and very significant, cultural, historical and natural assets of Banjalukaʼs region.

The region Zmijanje is an area of the northwestern B&H. It occupies the, northwestern part of Bosnian Krajina, a historic and geographic whole on which traces of prehistoric and Roman settlements, as well as the cities from medieval and Ottoman times, were found. It once occupied area between the rivers Vrbas and Sana, and mountains Kozara, Dimitor and Lisina. The river Vrbas cuts two canyons, Tijesno and Podmilacje, and there are various opportunities for sports such as rafting, canyoning, kayaking and canoeing. There is considerable space for the lovers of free climbing, beginners and experienced ones alike.

A natural structure, the Stone Bridge, is found in the vicinity of the settlement Krupa na Vrbasu and it is the starting point of the mountaineering-hiking route “Kocicevim stazama” (“Following the footsteps of Kocic”), that leads all the way up to the Monastery Gomionica. The first written trace about the monastery dates back to 1540/1541. The Monastery Gomionica, which Kocic made famous in his short stories, also had a profound influence on his childhood. It is here that Petar first went to school in 1887.

Zmijanje embroidery, which is a part of the intangible cultural heritage of the Republic of Srpska, since 2014, has been found on UNESCO representative list of intangible cultural heritage. It is considered the oldest hand embroidery in the Balkans, distinct for unique cross-technique and blue color. Even today, it is kept from oblivion by the skilful hand of the Krajinaʼs embroiderers.

The ancient walls of the city of Kano