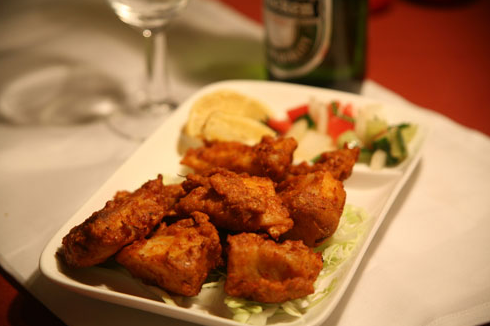 Rohu fish also called Roho Labeo belongs to the carp family and is found in abundance in the waters of South Asia. It has thick body and narrow head and tail. It can attain a maximum length of one meter and weighs around 2-6 kg’s. Rohu becomes mature between the age of two to five. They generally spawn during the monsoon season. Spawn may be collected from rivers and reared in tanks and lakes.

Lahore the land of Sufis, Saints, Emperors, rich traditions and cultures, a hub for intellectuals and artists, situated at the eastern bank of River Ravi that flows from north-western India into the Punjab river where it is called ‘Ravi’. A land of poetry, mysticism and festive. That’s not the complete description of the city. The city has a lot of things to offer to its admirers from food to clothing to a heritage of exuberant norms and traditions.
Fish used to be the food of people that resided along the rivers or coastline; the bread and butter of the underprivileged. So how did this dish that belonged to the local residents became so famous among the rich? The period that promoted the dish and its status was the Royalty of Lahore, the ‘Mughals’ and the Era itself.
The food presented at the Mughal courts used to be rich with exotic spices and flavor and the preparation of cuisine was undertaken as a piece of art destined to be utterly delicious and extravagantly perfect and complex. The cooks of the court thus excelled in the art of cooking and discovered innovative ways to bring out the best in the tradition of Mughal Cuisines. The Mughal Emperors, fond of beauty and richness and so, impressed the foreign guests, nobles and courtiers through the food served to exhibit their lavish taste and splendor of their Empire.

The cooks of the Mughal court were inspired by the cooks of Lucknow (then Awadh) for the preparation of fish by marinating it and presented it to the courtiers and earned their appreciation. The touch that made this fish recipe their own, employed the following method; a few indigenous spices were added to the fish and then set it to marinade. The fish was then dipped in rice flour and besan(gram flour), and finally double fried in order to bring extra crispiness and crunch and to make the fish bones brittle enough that they can be chewed through. This double fried, extra crunchy fish became popular in the region and among its inhabitants.
It is also said that the fish is related to the festivity of the city. The cool weather of the city during the months from autumn to spring, its celebration i.e. ‘Basant’, that itself is so colorful, vibrant and brings out joy and happiness, and the abundance of the fish in the surrounding river i.e Ravi prompted and inspired the cooks of the Punjab region to create of the Lahori Fish. The fish that is battered and given an orange yellow hue representing the colors of basant and is then served along with hari chutney or imli (tamarind) chutney.

Wash fish and let dry, mix marinade and rub on fish, and let it rest six to eight hours in the fridge. Mix the batter by adding cold water and dip the fish fillets in the mixture. Heat oil and fry fillets for eight to 10 minutes, remove from fryer and leave it on oil absorbent paper towels until fillets are at room temperature. Reheat oil and re-fry fish fillets on high heat for two to four minutes. Remove from fryer and serve hot with hari or imli chutney.

America’s food heritage and its quest for the perfect barbeque