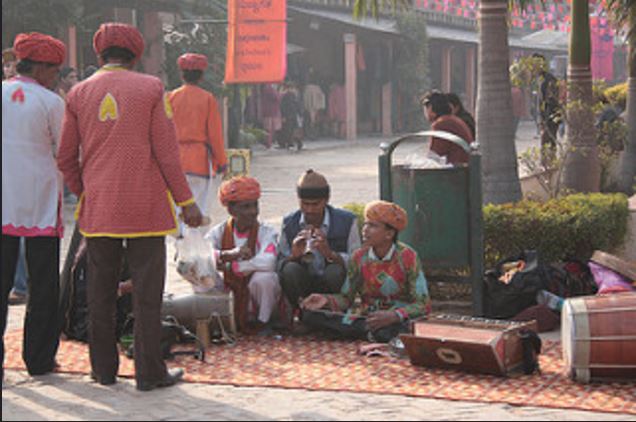 Having only tried traditional north Indian dishes in Delhi, we decided to look for a place which offered variety of food from different states. The one place which provided us with a diverse menu was Dilli haat, a cultural craft market and food plaza in Delhi which has stalls from almost all the states of India.

Here, getting to food stalls despite our hunger got really hard as we couldn’t help but notice stalls present. They displayed carpets, paintings, jewellery, clothing etc. After gazing at the fascinating stalls, we made our first stop at a Rajasthani food stall, with the place decorated with kathputli (puppets) and Rajasthani art.

There we ordered traditional Rajasthani dish called kachori, which is prepared from a  mixture of moong dal and urad dal (types of pulses) with lot of spices in it. We had our kachoris along with lassi (a yogurt based drink) and chai (tea), a perfect morning or evening beverage.

After this delicious appetizer, we started looking for more traditional dishes that would go with our preference of vegetarian dishes.

We headed towards the Arunachal stall, and ordered ourselves momos and chop suey. The first dish is traditionally a Tibetan dish, and has now become very popular in Delhi, as one could always find a section of menu exclusively meant for momos. Just like any other dishes, momos has adapted itself to north and north-east Indian taste-buds. With its stuffing ranging from chicken, mutton to paneer and soya.

The second dish was a Chinese-American dish, estimated to have been created during the gold rush. It has an interesting story of being created after a group of tired workers demanded food at a closed restaurant, and the chef whipping up a dish out of left overs meat and vegetables. Chop suey in India is served as dry and fried noodles along with a delicious gravy to dip them in. The main difference lies in how they’re crispier than soup and noodles. It was fascinating to see how cultures mingle and adapt themselves to create such amazing dishes.

The walk ended with our experimentation with 3 dishes, and we all went ahead to buy different things for ourselves with satisfied stomachs.

A Visit to the Governor’s House in Tamil Nadu

Want to nurse your soul? Savor the chicken soup in Seoul