Just two days after UNESCO put the ancient tombs of Muslim saints in Timbuktu, Mali on the endangered list, one of the tombs was wrecked by a group of radicals. The hardline Islamists have called the tombs ‘haraam’ or forbidden in Islam and have threatened to destroy all mausoleums in the city. It is just so sad to see people do all kinds of nonsense in the name of religion. 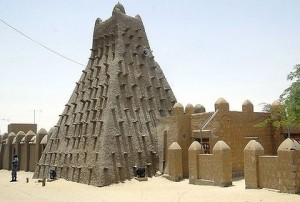 Here are a few articles with more information – link1, link2